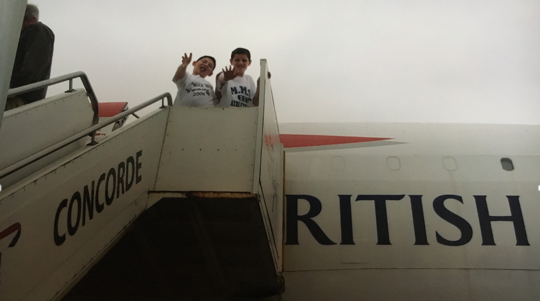 When my kids were very young we’d sometimes take a short ride over to our local airport so they could join me in the club.    They wouldn’t cause any trouble for frequent travelers.  They’d just grab some packages of cookies and stand by the window watching the planes taxi to the runway and take off.  It was a relaxing, fun way to get more value out of an airline club membership, and at the same time both entertain my kids and help teach them that there is nothing stopping them from going anywhere in the world.

The clubs – and any part of the airport (if you’re not flying) - are off limits.

The airlines have so oversubscribed the clubs and so under delivered services there that there’d be no place for the kids to watch the planes in any case.  The packaged snacks are also long gone.  Anything you could throw in your briefcase or pocket to eat on the plane has long been replaced by cheaper, non-packaged versions of food that are very difficult to bring with you (not that you’d want to.)  The airports themselves are now mostly miserable places – where there are long lines, angry people, angrier employees, and pop-up merchants where there used to be moving walkways.

Before 9/11 travelers knew to buy tickets with only a first initial and a last name - so they could be transferred to someone else in the family at the last minute if there was a change of plans.  Change fees were unheard-of.  Now, the focus on security (real or perceived) has removed that little trick.

A few months later an idiot tried to light his shoes on fire on a transatlantic flight.  He had plastic explosives hidden within them.   Thankfully he was subdued by passengers and has been locked-up ever since.  In response to this event, airport security now requires that most travelers take off their shoes for inspection before getting past the checkpoint.

We’ve lost the ability to wear shoes through security.

Before 2006 most travelers used to take small bottles of water to the airport so they could stay hydrated during a flight.  Then, a group of terrorists came up with a hare-brained scheme to use liquid explosives on a transatlantic flight.  Bottles of liquid are now not allowed past airport security.  Oddly enough, that 16.9 ounce bottle of spring water that costs 50 cents at a Costco vending machine (and 3.99 for a case of 24 bottles) now costs close to $4 at most airports.  Who pockets those profits?  Well, if you’ve noticed, you can now pay for items at many airports with either money or frequent flyer miles.  You guess who’s pocketing the cash.

We’ve lost the ability to bring water to the airport.

In 1999 a brand-new, gleaming golden Las Vegas hotel had its grand opening.  It was an amazing place, with a huge parking lot, a restaurant that had a wall of flames at its entrance, its very own House of Blues, and awesome rooms that all had huge bathrooms with Jacuzzi tubs.  Later on it added an enormous convention center, its own Four Seasons hotel, a huge aquarium full of sharks, and many other amenities.

I’ve made many great memories at this place - there was the time I won a big jackpot on a tennis themed slot machine….the great concerts on the beach…the artificial wave pool and the lazy river I’ve floated around countless times.  There is the annual CES conference, as this is the place where all the press and analyst events are now held – and there are countless other industry conferences where I’ve attended, networked and met with clients and colleagues over a meal or a drink. 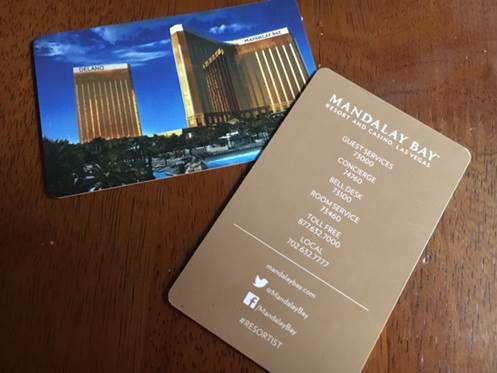 A week ago, for no reason that has been put forward to date, a madman used my special Las Vegas place as a sniper’s nest, raining bullets indiscriminately on an unsuspecting crowd of concert goers.  Over 50 people were killed and over 200 wounded.  The property, the community and the whole world were shocked by the senseless violence.  Many people are grieving the loss.

We’ve forever tainted the memory and history of Mandalay Bay, and to some extent Las Vegas.

I, like many others, wish it never happened, and hope it can be a catalyst for the implementation of common-sense regulations.  If 9/11 can keep non-flying kids from the airport and require us to use full names and government ID for travel, If one idiot can force us to take our shoes off at airport security, if one group of nutcases can stop us from bringing bottles of water to the airport, then common sense dictates that we should make some sort of change regarding weapons that have no place in defending private citizens or sport hunting.

Without wading too deeply into that debate however, it is obviously time to grieve another huge loss.