The Wild West All Over Again 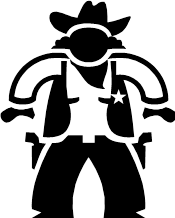 The Wild West.  It’s a phrase people use to bring forth the images of the early days of the western United States.  Everyone had guns, there was no organized law and people made-up rules as they went along.  It is also an expression often used to describe situations where there is no established protocol.

Television in the 1950s in the United States was the Wild West.  Odd camera movements, even odder transitions (wipes and stage effects) and still yet odder programs (like one children’s show called Winky Dinks that encouraged you to draw on the TV screen.)  By the 1960s there was a set of established norms that broadcasters followed.  The internet in the 1990s was also the Wild West.  There was this thing called Mosaic connecting a “network of networks”, people had to learn how to do a 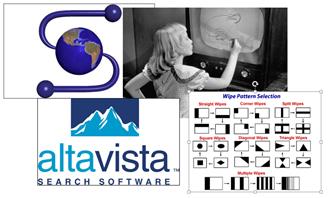 Gopher search (which never really worked anyway) then this thing called Netscape came along, then AltaVista – it was all pre-Google - the Wild West.

When you live in these kinds of moments it’s difficult to realize they are happening.  In retrospect however, the fact that you lived through them becomes obvious.

A few weeks ago I gave a presentation to a local group of communications professionals about this year’s National Association of Broadcasters conference.  As I was speaking it dawned on me that we are living through another one of these Wild West times.  Actually, we’re living through more than one at the same time.

When I went to college, students that wanted to have a career in broadcasting were told there was one job for every hundred applicants.  You had to be very good and very dedicated to break into the industry, starting at the bottom and moving up slowly if you’re lucky.  Broadcast quality cameras cost nearly a hundred-thousand dollars at the time.  Nowadays, a teenager who builds a quirky website can become a billionaire.  The Second Screen phenomenon is exploding.  People are either unplugging from traditional television or supplementing it with their tablets, smartphones and PCs.  Smartphone and Skype video is used on the air all the time.  Why can’t a student trying to break into broadcasting simply ignore the norms and publish their own content to their own site and make it big?  It’s the Wild West all over again.

For as long as I can remember, people who wanted to start their own business had just a few options.  They could borrow the money from rich relatives, prove to a banker that they didn’t need the money they were asking to borrow, or get introduced to the right Venture Capitalists.  Nowadays, with the new phenomenon of Crowdfunding, anybody can raise funds and/or be an investor.  I am proud to be an investor in the next, semi-professional Star Trek Movie via Kickstarter (a really, really small investor.)  It’s the Wild West all over again.

The process for career advancement has always been the same: put in hard work to prove yourself; include all your experience in a great, professionally organized resume; get some fabulous references.  Nowadays, the resume is mostly useless, being replaced by a LinkedIn Profile.  The references are useless as any good HR professional will have already checked what your connections think about you before they ever call you.  I didn’t realize this segment was also in a Wild West phase until three recent events convinced me.  Three of my LinkedIn connections – respected industry colleagues – sent blast messages to everyone they were connected to.

·         In the first message, this gentleman explains he’s hard at work getting ready to launch a new start-up business, but until it’s ready he’s open to accepting any corporate Board of Director positions that are available and would like to be alerted if the opportunity arises.

·         In the second message, this gentleman explains that he has created a survey – a sort of report card/evaluation of him as a person - and asks everyone to help fill out the survey so he can have some honest feedback as he looks for new challenges in his career.

·         In the third message, this gentlemen breaks all the old rules about not letting prospective employers know you’re out of work and openly states that he has been let go in a general staff reduction and has a resume available for those interested.

While these certainly fly in the face of traditional thinking, who is to say that any of them isn’t a good thing to do?  For the modern job seeker finding savvy ways to use social media, it is most definitely the Wild West all over again.

In about a week (as I write this) I will be attending the InfoComm Conference and Exhibition in Orlando.  This is the preeminent annual conference for audio visual, multimedia and collaborative conferencing specialists. I’m honored to again be one of InfoComm’s faculty – presenting at and/or moderating some educational sessions.  This event also represents a bit of the Wild West this year, as there will be several disruptive changes in conferencing technology on display. If you like attending technology expositions then you should definitely come to this one as it’s one of the best.  If you need free admission just drop me a note.  And, if you do come to see me at one of my sessions, please do let me know if you have any Board of Director seats open at your organization, as frankly I wouldn’t mind getting me some of them perks myself….