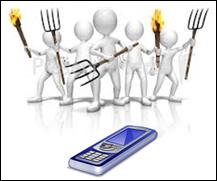 One of my favorite quotes was by H.L Mencken.  He explained that all complex problems have an easy answer – which is usually completely wrong.  Such is the case with the recent discussions about the US FCC reviewing the possible use of mobile phones on airplanes. (Personal electronic devices can of course now be used on flights because of the recent FAA review, but this new FCC review is all about their use NOT while in airplane mode – a change that would allow texting, and heaven forbid, real phone conversations from airplanes.)  People are angry - grabbing their torches and pitchforks and getting ready to kill the technology that would destroy their cherished way of life.  Sadly, as in this case, sometimes people are fooled by the easy answer.  There’s nothing wrong with allowing people to use their cell phones on an airplane.  The real problem is something else.

Setting our Wayback machine to about two years ago, the US National Transportation Safety Board called for an outright ban on mobile phone use by drivers.  It was their opinion that “distracted driving” - even when using hands-free devices – put drivers at grave risk.  At that time I recommended that we “peel the onion” a bit on the concept because it just didn’t pass the logic test.  Were we saying that people are unable to drive and talk at the same time for fear of distraction?  Really?  People had been talking in cars since cars were invented.  And not just talking - singing to music, eating lunch from the drive-through, breaking up arguments between our kids.  Were we then suggesting banning car radios and cup holders?   Should we reverse the decades old push to carpool for our environment and instead insist that drivers be alone in their vehicles so they could concentrate completely on driving?

I wanted to know what science that recommendation was based upon.  It was hard to understand how one could possibly conclude that people are unable to communicate on headsets and read instruments while still concentrating on operating a vehicle.  How would airplanes fly if the pilots were not in constant contact with the air traffic controllers and continuously monitoring their gauges?

I concluded that what the NTSB was really saying is that it didn’t trust people to use good judgment with communication devices - that while having a conversation in a car (in person or via a headset) was OK, they just didn’t trust people to resist the temptation to do something really distracting while driving (like post about their ride on Facebook, or text their Aunt Matilda that they just saw someone who looked like George Clooney.)  This was completely different from saying that people couldn’t successfully drive and communicate.  This was saying that people were typically idiots who didn't use their brains.  Now if the NTSB could find a way to ban idiots from driving in cars I for one would have been eternally grateful.  But until they find a way to do that it was just ridiculous to penalize everyone else because idiots find ways to distract themselves with mobile devices.  Without any mobile devices there would still be idiots driving and distracting themselves with things like make-up, newspapers, other passengers, etc.

If you cut back to today’s conversation regarding potentially allowing mobile phone use on airplanes, the same logic applies.  There is nothing wrong with technology that enables people to communicate as needed for both business and personal reasons.  Airline passengers don’t have a problem with technology.  Just as above, airline passengers have a problem with idiots.  Idiots that spend the whole flight trying to strike-up a conversation with a stranger that’s trying to sleep or read; idiots that sit next to their friends and spend the whole flight in loud conversations; idiots in front of you that snap their chair back to full recline in coach the second after takeoff (leaving you with personal space the size of a thimble); idiots that bring young children on flights and don’t supervise them; – the problem is with the idiots.  As I said above, if we could find a way to ban the idiots from flying I’d be grateful, but I assume not only is that impossible, but at least a few cabin crews I’ve experienced and all airline executives would never fly again - so I don’t think that’s a practical solution.   If we allow people to use their mobile phones and stay in touch with the rest of their lives no one will die, no laws will be broken, no one should be offended.  There is no religious or governmental decree that I’m aware of that deems aircraft as meditation sanctuaries, so we have to take that silly argument off the table too.  What would be bad is if people act … well, like idiots when using their phones – talking too loudly, being inconsiderate of their fellow passengers, etc.  But since that happens all the time anyway I don’t see how using mobile phones will change the situation.

So in my opinion, the FCC should allow the use of mobile phones on aircraft (especially now that they finally agreed that personal electronic devices don’t harm aircraft in any way.)  Our governmental agencies should refrain from making illogical recommendations that impact intelligent adults in the hopes of preventing idiots from being idiots.  Nothing can stop that – just look at the last few elections.