It’s Sunday morning here at the Hampton Inn. When I first woke-up I wasn’t really sure what city I was in – just about all the Hampton Inn’s look alike.  Don’t get me wrong, I like Hamptons and truly appreciate the consistent level of quality as I travel – no frills and all.  It is comforting to know that if I need to be somewhere where they have a Hampton I have a great chance of staying in a clean, functioning, and relatively inexpensive property – and one that offers a satisfaction guarantee.  Yes, there are higher-end choices I could make, and yes I’m ultimately spending my employer’s money and not my own, but I just don’t think it’s right to spend more at a fancier property (where the amenities like internet and breakfast might not be free) even when I’m being reimbursed.  The less my employer has to spend on travel, the better their bottom line will be at the end of the year and the more they’ll have available for more important things – like my compensation.

Whether it’s someone like me who works for a great firm that cares about its people - or someone self-employed or with a small business – welcome to the era of the New Business Traveler.

The reason it is Sunday morning here at the Hampton Inn in Detroit is because if I were at my house it’d cost about another grand.  Had I flown out here on Sunday for a Monday morning meeting I’d have had to pay a fare of about $1,500 US.  By flying out on Saturday I paid a fare of about $300.  (Those are both for about an hour on a tiny, cramped, awful Regional Jet by the way.)  The Hampton was under a hundred bucks for the extra night.  Mind you I can’t do that all the time – I may have family commitments or other reasons not to kill a Sunday blogging at a hotel, but when faced with the choice of saving that thousand or spending it I chose saving.  Choices like this are being made by the New Business Traveler every day.

It was Gordon Bethune, the former CEO of Continental Airlines (a crass, lying, loudmouth who unfortunately and justifiably looks like a saint and a genius compared to the current clueless management at the now merged United Airlines) who said "If you have to be in San Francisco for a presentation tomorrow, you are going. If I say it's $1,200 or it's $800, you are still going."  While that may have been true at some point, it is not true for the New Business Traveler.  Now there are choices.

·       One choice is to fly over a Saturday night.  It’s not always possible, but when it is - even with the added expenses - the savings can be significant as above.

·       Another choice is to fly nearby.  My meeting last week was in Richmond, Virginia.  Fares from EWR to RIC were in that over a thousand range again (and again for less than an hour on an RJ.)  But fares to Washington, DC were about $300.  So a colleague and I flew into DCA and chose to rent a car and drive the additional two hours.  A pain in the neck – for sure, but the money stayed in my / my firm’s pocket.

·       And videoconferencing has become a choice that is more and more viable.   Even if the person / firm you are planning to visit does not have a well-established videoconference room and/or has an unknown environment there are still a number of great options available that let you use a high-quality system and lets them use a computer or tablet to attend.  This technology – which had been buggy or complicated for a long time – is now extremely reliable and easy to use.  In fact, while I’m here in Detroit and when my initial meeting is over I’m going to videoconference to another client in Upstate NY before I fly home.

The airline industry has been completely blind to these New Business Travelers.  In more words of Mr. Bethune, this time he correctly called airlines “a stupid industry led by stupid people" and pointed out that “you can make an airline so cheap nobody will fly it.”  The devaluation of the customer experience in travel – at a time when most industries have come to the realization that the customer experience is the single most important factor in their livelihoods – is just more proof that the airlines’ old business model is well past its prime.  Why it costs me ~$1,500 to fly an hour on a regional jet but costs me ~$300 to fly coast to coast in a mainline jet is more due to arcane and unrealistic fare policies than anything else.  The silliness inherent in this legacy airline pricing system was best described by the Al Hess satirical piece “If Airlines Sold Paint.”

It is the height of irony that the exact customer the airlines are seeking out – the experienced and frequent business traveler – are exactly the ones that are being pushed away by their customer unfriendly policies.  Only inexperienced leisure travelers who shop-around based on price and nothing else will tolerate smaller seats, cheaper/non-existent meals, excessive delays due to cheaper outsourced maintenance, reduced elite benefits, recalculation of mileage earning, and the continual bait-and-switch of so called airline loyalty programs.  Travel columnist Christopher Elliot pointed out this trend succinctly in his recent column, explaining that American business and leisure travelers are “jettisoning blind brand allegiance in favor of a more pragmatic view.”  We are at the height of modern technology and knowledge yet our flying experiences are at the worst point in our history - controlled as they are by a very small number of firms and their generally way-overpaid executives. 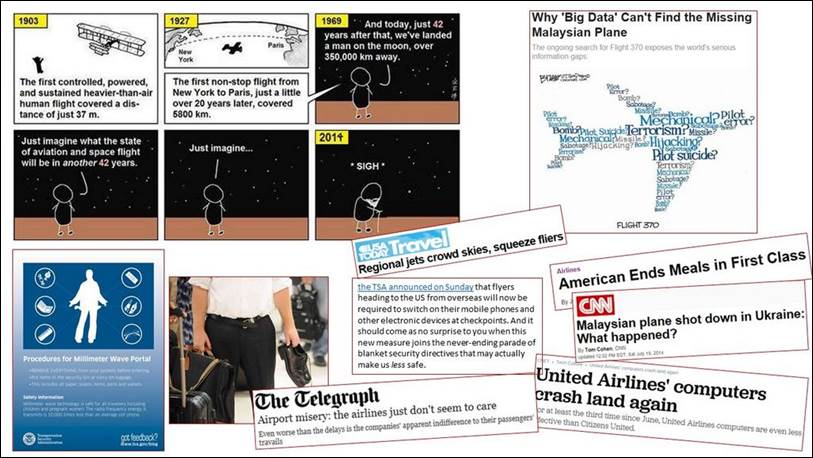 All of this makes me think how it will only take one firm to do to the airline industry what digital music did record stores.  When was the last time you were in an HMV, Virgin Music or Tower Records?  Many successful, huge anchors of this industry closed because something better came along and their model became outdated.   We need one new player - not to create a better airline - but create a different model for air travel that renders the current legacy carriers outdated.  What we need is a Hampton Inn for the air.  Reasonable prices for reasonable service, no upcharges, a satisfaction guarantee, management that respects their employees and encourages them to be “at their best” and a realization that the only way their business will be successful is if customers like it and come back.  Yes, Hilton (Hampton Inn’s parent) has devalued its loyalty program too, but they haven’t done it while lowering their quality of service - a one-two punch that the airlines haven’t realized will lead to their death.

The New Business Traveler is here to stay.  It is only a matter of time before someone comes along with a business model that caters to them and puts the legacy airline carriers out of business.