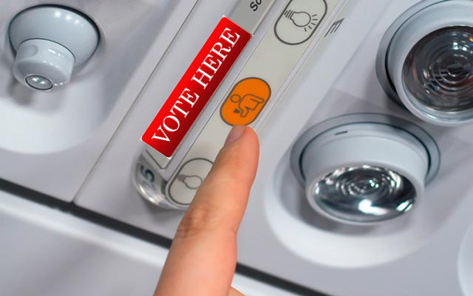 This hasn’t been a great year for United Airlines.  Not that it’s been great at any time since the failed merger of United and Continental, but this year is when it all came to a head.  It’s when the awful CEO that had run everything into the ground was removed from his position (because of shady political dealings that came to light while investigating the “Bridgegate” scandal.)   We then got a new guy who came in with lots of promise - who started to solicit feedback by using the product and speaking with employees and passengers.  He also opened a new website to hear what people were thinking.  Regrettably, he has now been sidelined with a serious health issue and temporarily replaced by the airline’s general counsel.

As a frequent United flyer and Million Miller (because of my Newark “hub captive” status) I have been on many flights where I could honestly say “this is a new low.”  There was the time that I had to wait for engineers to duct-tape closed a bin with a broken latch before we could leave.  There were the multiple times the gate agents hassled my family and I over the size of our perfectly legal luggage.  Then there were the experiences I only read about – like the passengers stranded in army barracks while the crew was in a hotel waiting for a new aircraft, or the child flying alone they lost at the airport – honestly I could go on and on but really don’t want to just “pile-on.” But then – there was my flight home this past Sunday.

After attending a conference in Las Vegas I was due to fly home at 5:15pm.  Our inbound aircraft was delayed in Denver due to a needed repair, so the new departure time was scheduled for 6:09pm.  The boarding was late but generally organized and relatively painless (except of course for the lousy new slimline seats with the unusable mesh seat-back-pockets) but then the flight crew makes an announcement:

‘Our catering service for the plane has not arrived yet.  The Captain asked me to let everyone know and ask you to vote on whether we should wait and be further delayed or leave now without the food.  If you want us to wait please press your call button now.’

Honestly, I was flabbergasted.  How should a passenger react to such an announcement?  (I brought a sandwich and drink with me, so I had no skin in the game, but I couldn’t get past the ridiculousness of that request.)  If someone did want to wait they would have to ring their bell and light their light and incur the wrath of the other passengers that were already now very late getting into Newark.  A number of arguments and disagreements between passengers began almost immediately after the announcement – with shouts of “a-hole” and “idiot.”  It was like the crew knocked-over a bottle of instant air-rage and sprinkled it on the passengers.  Here they were arguing with each other on how to “vote” without knowing how long a wait it might be, without the privilege of anonymity, and without any explanation of the actual problem – why was the catering still not there if the flight was already over an hour late to depart.  Folks, that’s not late, that’s just incompetent operations.

I wondered what other ridiculous questions we could openly vote-on from our seats.  Maybe we could vote some passengers we didn’t like off the plane?  Maybe we could vote to unseat the first class passengers and move them to the back of the plane.  Heck, maybe the passengers in Denver could have voted not to wait for the repair that delayed the inbound aircraft in the first place – judging in their expert mob opinion that leaving on time was more important than any risk.

How the crew (and ostensibly the Captain) couldn’t foresee asking passengers to vote from their seats would be a disaster is beyond me.  Personally, I’d like to have voted for a partial refund of the ticket price in exchange for the failed service, but that was not an option provided.

As it turned out, no one voted to stay despite the shouting matches.  We left about an hour and a half late and got into Newark about an hour late.  Of course, as any Newark hub passenger would know, after landing there was “trouble with the jetway” adding another fifteen minutes of unnecessary delay to an already delayed flight.  Personally, I’d have voted to blow the emergency slides and get off the plane before 2am, but again – that option was not offered.

I hope the new United CEO gets out of the hospital and recovers as soon as possible.  We need someone with the conviction to fix this mess.  If he’s smart though, he might vote for a long recovery to avoid the daily ridiculousness as long as possible.