Time To Take Back The Sky

My friend Joe Brancatelli wrote an article a couple of months ago asking the question “why do the airlines hate us?”  It’s a really good question.  If you’ve flown a US commercial airline over the last few years you know that ‘hate’ is the truth even without reading his examples (or mine below) - you have plenty of examples of your own.  A small cabal of airline companies run by greedy management (that is totally in the pocket of Wall Street) are not just making everything harder for their passengers and employees, they’re doing it with an “in your face” attitude that knows no bounds.   It’s time for people to rise-up and put a stop to it.

The incident that brings me to this conclusion wasn’t as much of a big deal as it was the proverbial straw that broke the camel’s back.  When leaving on a family vacation last week I was stopped from 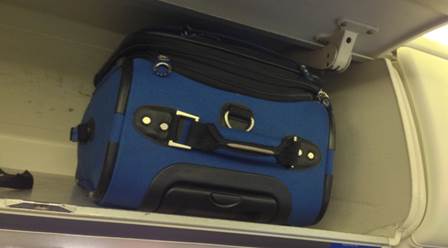 boarding a United flight by a surly and disrespectful gate agent who said my carry-on bag was too big.  When I complained, explaining that the bag in question had flown with me on-board for the last few years, and fits correctly (lengthwise) without incident, an argument ensued.  A supervisor came over.  The supervisor said “I know your bag will fit on the plane without a problem, it just doesn’t fit easily into our sizer.”  Then, not just me but my entire family was forced to check our legal carry-on bags if we wanted to board ‘just ‘cause the agent said so.’   My kids and wife had no opportunity to show that their bags fit in the United sizer – they were convicted as rule breakers simply because of my protest.  We lost an hour of our already brief vacation waiting for our perfectly sized bags to be returned (late of course) when we arrived at our destination.  Here’s a picture of the instantly convicted bag fitting with plenty of room on our flight home today – same airline, same plane, no ‘I hate you because I work at EWR’ hassle on the trip back.  Was I lucky this time or just unlucky last time?  Why should luck have anything to do with physics and science?

Maybe my infuriating carry-on incident doesn’t seem like a big deal to you.  However, how big a deal is it if your airline strands you in a foreign country with no communication?  That’s exactly what happened to people flying United to London a few weeks ago.  Their flight from Chicago to London made an unscheduled stop in Goose Bay, Canada when the pilots saw an indicator they didn’t like.  No one argues with the cautious decision to check the plane, but how it was handled is appalling.  United put passengers into an unheated army barracks for almost 24 hours (while they put the crew up in a hotel.)  They could have sent another plane for them, they could have communicated with them, they could have treated them with respect – but instead, they treated them with the same hate and disdain Joe spoke of above.

How big a deal is it if your airline kicks you off a plane on the whim of a single flight attendant?  A United crew diverted a flight and kicked-off a passenger and her autistic daughter because they feared the girl might be disruptive.  This was a passenger that politely requested to have some food heated-up to help keep her disabled child comfortable.  This was done without incident, and the child never showed a behavior problem, yet it made the flight crew feel their authority was challenged, so they unilaterally decided they didn’t want her on the plane anymore.

How big a deal is it if your airline changes the rules about the frequent flyer programs they’ve used to lure you into buying their services?  Delta recently made changes to its frequent flyer program – and won’t even tell passengers what new amount of miles are needed for what flights.  As covered in this good recent article, Delta will do whatever they want whenever they feel like it.

Think about that phrase for a minute.  The airlines know they can do whatever they want, whenever they feel like it.  They throw around the phrase “breaking federal law” when they don’t want you to do something (the same way a four year old would say “I’ll tell my daddy”) even though no actual laws that I know of exist to:

·       change the rules of their contracts with passengers for services, mileage redemption, etc.

·       strand passengers for hours without communication or adequate facilities for sleeping, dining, etc.

Yet the courts have upheld an airline’s rights to do just that – to do whatever it feels like.  In a recent lawsuit, the federal Seventh Circuit court found that United Airlines could get away with offering their million mile flyers what they called “lifetime benefits” yet are free to change these “lifetime benefits” whenever they feel like it.  While the court’s written opinion found United “misleading and perhaps even fraudulent,” it said that passengers had no rights to sue to address the fraud under the way current laws are structured.

So why should a passengers continue to give business to an airline if it does whatever it feels like?  If a supermarket treated us that way we’d shop somewhere else.  If a doctor treated us that way we’d find another one.  So, why not just fly another airline?  Well, as the Delta article above points out, “many of you are more or less stuck with your airline. With just a handful of big carriers left, there may be only one reasonable alternative for decent flight times where you live…”  Or, as I pointed-out in my blog If Airlines Were Restaurants, the airlines have conspired to prevent competition on direct routes between airports.  They’ve carved up the sky amongst themselves and don’t really compete with equivalent direct service from individual locations.  The fact that US airlines are diminishing their service and changing their loyalty programs is exact proof that they feel they can get away with anything.

The biggest reason this should be of grave concern to you is simple.  As opposed to supermarkets that own their land / products or doctors that provide services based solely on their skills, with airlines, they’re providing you services based on sky and airports that you already own.

The airlines act as if they’re selling you a product they created, when in reality they are providing a service that uses facilities and natural resources owned by the public, not them.  Our governments and communities own and pay for the airports that we let the airlines use.  And even though the airlines treat the “slots” at these airports (the allowed take-offs and landings) like their own property, the reality is that the public owns them too.

Despite this, the majority of benefits derived from US air travel today go to airline company management and Wall Street investors.  What should be operated in the “public interest, convenience and necessity” (as we used to describe it the broadcast spectrum) is being operated for the private gains of the greedy few.  The passengers are irrelevant cargo that have to put up with whatever the airlines want to do whenever they want to do it - and the airline employees face management that cares less about quality and conditions and more about cutting costs and increasing profits.  Just last week United announced that it is beginning a stock repurchase program at the cost of three billion dollars.  In very strong words, the United pilots were infuriated – saying that it is ridiculous for United to continue to let its service deteriorate and be an industry joke, yet take the money to line the pockets of investors and management instead of making service improvements.

I’ve personally come to the conclusion that this situation will never improve unless the government steps in and takes the unilaterally usurped authority back from the airlines.  We need a new passenger bill of rights, but one much more extensive than the one discussed in the past covering tarmac wait times and lost bags.  We need actual laws preventing the “do whatever we feel like” actions of the cabal of US airlines. Guarantees that clearly spell out that the people’s airspace and airports need to be operated in the public interest – not those of the stock investors.  Guarantees that ensure airlines can’t just make unilateral decisions about kicking people they don’t like off planes.  Guarantees that set minimum standards for seat width and pitch and carry-on size.  Guarantees that ensure airlines who want to charge you for checking luggage feel a financial sting when that service doesn’t return the bags to you within a reasonable time.  Guarantees that ensure that when airlines make fraudulent claims they can be acted against just like with any other business entity.

So ultimately, the answer to Joe’s question - why do the airlines hate us – is because we let them get away with it.  We need to stop.  Now.