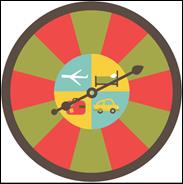 I, like many others, watched the first US Presidential debate of 2016 earlier this week.  Now before you get concerned, I assure you this blog is not about politics.  (No matter how much I want to scream about the stupidity of those who don’t see the world as clearly as I do, I’ll restrain myself.)  What is interesting though is the perspective of those who watched the debates.  Almost all news commentators saw it one way.  At the conclusion of the debate one candidate was beaming, the other was essentially sulking.  The internet memes agreed, making fun of the apparent “loser.”  But the next day however, there were polls showing the exact opposite result, and both candidates were gloating about winning.

I realize all of this is subject to interpretation - and that we all tend to see politics through eyes that seek-out ideas we already agree with - but I’m amazed at how our society and culture can so easily be manipulated by spin.

Spin – according to Wikipedia - is “a form of propaganda, achieved through providing a biased interpretation of an event or campaigning to persuade public opinion in favor or against some organization or public figure.  While traditional public relations and advertising may also rely on "creative" presentation of the facts, "spin" often implies the use of disingenuous, deceptive, and highly manipulative tactics.  Spin is typically applied to events or situations which are deemed to be unfavorable or potentially harmful to the popularity of a person, brand or product.  As such, a standard approach used in "spinning" is to reframe, reposition, or otherwise modify the perception of an issue or event, to reduce any negative impact it might have on public opinion.”  In the above political example it is taking the loser of a debate, manipulating on-line opinion polls, and coming-up with talking points that make the opposite of what is true seem plausible.  Again, with our cultural tendency to only hear what we already agree with, spin in politics is relatively easy.

But how do we explain the spin when it is applied to the travel so many of us do?

·       When the 787 “Dreamliner” started flying airlines told us about the fabulous interior experience, the lighting, the mood effects, etc.  What they didn’t say is that they shrunk the seats so much that people would avoid the plane at all costs.

·       When we receive an email from an airline that states they are “enhancing” and “simplifying” parts of their rules, you can rest assured that nothing is getting better but the spin.  Fees are going up, privileges or benefits are going down, and frequent flyer programs/miles are being devalued.

·       The dozens of times an airline states “in response to our customer requests we’re [doing something our customers would never really have asked for in a million years]” you just know you’re being spun around the liar tree.  No customers would ever ask for crappier coffee, later boarding priority, awful meals, reduced upgrades, etc. – but that’s the spin they use.

Why are average people so easily swayed by spin when it’s not in their best interest?  Perhaps it’s because our human nature wants to believe that the companies we patronize (like our preferred political candidates) deep-down really want to do the right thing.  Most people are optimists that give the benefit of the doubt.

In the business travel space however, I believe most people are cynics like me – and are mostly un-spinable.  We’d much prefer to be told the ugly truth than have it presented to us dressed-up in a costume.  We know the greedy firms working in this sector would put pay-toilets on planes if they felt they could get away with it (with just the right spin of course) so we tend to look past the costumes, make-up and wrapping paper and see the truth pretty easily.  Instead of listening to the words of the airline marketing people we look at what the airlines have actually done.

If only more voters were business travelers.