I just wiped out my frequent flyer balance, buying tickets for holiday season travel for my family.  I hated getting tickets at the “standard” level (which is my airline’s not so new euphemism for double the price of miles to remove their availability restrictions) but I had no choice.  Even though I consider the frequent flyer miles “currency” and the tickets obtained with them “a purchase”, my airline doesn’t.  They feel that they are an award that they’ve bestowed on me and they can devalue them at any time.  On November 1st United joins other airlines and wipes-out the guaranteed rates for mileage award travel, essentially devaluing them significantly.  If I hadn’t emptied my account, my miles would have been worth far less than they are now.  No customer is happy with this situation, but as I and others have explained many times, the airlines “don’t really give a shit” (as John Oliver said.)  The consolidation of the industry means they don’t have to – there is no longer a choice to use another provider if one is unsatisfied.  Nothing will get better until the airline industry is re-regulated or collapses (or is Uber-ed) so I just shrugged and spent the miles.

While most small and medium businesses (and even some big businesses) have made ‘the customer experience’ a prime focus of their activities – knowing full well the cost of poor customer service – there are still a growing number of firms that have made “not giving a shit” about customer service their corporate credo.  It seems to be a growing malignancy in today’s service world.

Take for one example the venerable and respected newspaper the New York Times:

We live in New Jersey and have ordered home delivery from The Times – something that should be a simple task – for over 20 years.  I have switched to reading all my news on-line, but my wonderful wife is one of those people that likes holding the paper as she reads.  (You know the type – the odd ones that have mastered the ability to fold the columns vertically as they read on the train.)  That paper is supposed to come at 6:30am – so one can take it with them on their commute – but on the days it actually comes it arrives closer to 11am.  The person who delivers it has asked us not to call The Times and complain if there is an issue, as it costs her a penalty for each complaint.  She dropped-off a note with her mobile number and said to call her directly.  Regrettably, when we do, her voice mail is always full.  When we finally had enough of this we called the NY Times delivery number, which I later found out is not really the NY Times, but rather a firm they outsource delivery to (in their name.)  When we complained, they offered us a discount.  When we said it wasn’t about the money, it was about the service, we got nowhere.  We then asked to cancel the subscription, at which point their computers “had some difficulties” and were “going slow.”  After we were on hold for about 30 minutes waiting out the difficulties, we finally asked for a supervisor, and then said we wanted a return call from someone that actually works at the NY Times circulation department.  We’re still waiting.  Regrettably, the only choice we have at this point is to cancel the subscription, which seems to be an odd result for the newspaper to desire, but is the obvious result of this tolerated poor service.  (By the way, if you know anyone at the NY Times that would care to hear the details, tell them to feel free to contact me.)  We have a poor customer experience, an organization that doesn’t provide an easy way to escalate problems, and one that apparently doesn’t care about the perception.

Take, for another example, the venerable and respected broadcaster CBS:

CBS has relaunched another television show in the Star Trek franchise.  Star Trek: Discovery is the newest show, but it is available only via CBS’ new, paid, streaming video service “CBS All Access.”  The show is best described as “dark” – it is visibly darker than past Star Trek shows and has a darker perspective of the future – one that is not nearly as hopeful as the vision of the future that has been an element in all past Star Trek series.  (In fact, if one wants to watch a show closer to Star Trek’s original vision, Seth MacFarlane “The Orville” – even with its really stupid jokes – is more in Star Trek’s legacy than Discovery – which makes sense as it has a production team with many ex-TNG people.)  However, as I’ve always said, bad Star Trek is still better than most TV programming, and because I was already subscribed to CBS All Access to watch The Good Fight, I’ve been watching the new series.

Unfortunately, watching the 6th episode of Discovery Sunday night was impossible.  The CBS streaming service melted down.  Anyone trying to watch it would see twenty seconds of a scene, then the picture would freeze, blank-out and say “loading” for 10-15 minutes.   If you waited that long, when it came back, you’d get twenty more seconds until it froze and disappeared all over again. 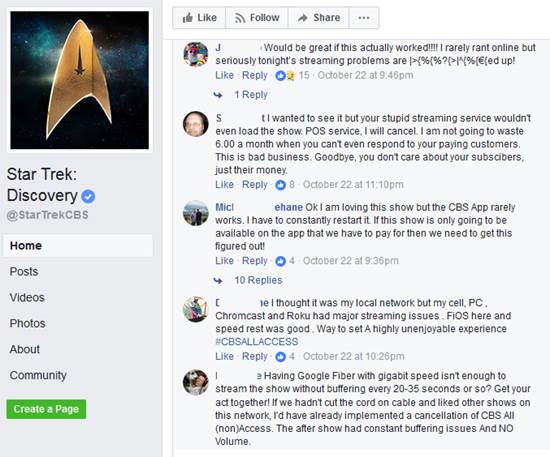 The first thing one does in such a situation nowadays is check out social media to see if the problem is just local to you.  On twitter, there were a few people saying how great the episode was (oddly enough these rah-rah comments about the show were posted before they could possibly have watched the entire episode) and there were hundreds of people complaining about how the stream wasn’t playable.  There were also hundreds of complaints on their Facebook page.  A visit to the CBS All Access website did not provide any updates on the service, and didn’t contain a phone number to call for service – only an email form.  I used the form – to say ‘if they can’t provide an explanation of why this happened and a guarantee it won’t happen again I’ll cancel the service. ‘

The next morning, some articles were published about the issue, where CBS claimed that the problem only affected 5% of people and it was quickly remedied.  That seemed very fishy to me.  When I did get an answer to the form later in the day, it actually had a CBS All Access phone number on it (888-274-5343.)  When I called the number, the agents completely contradicted the CBS statement, explaining that the whole service was down all day, and they still don’t know why.  Again here we have a poor customer experience, an organization that doesn’t provide an easy way to escalate problems, and one that apparently doesn’t care about the perception – and won’t hesitate to lie about it to the press.  All I’d have to do is find an uncomfortable seat and I would swear I was on an airplane.

Then, take as a final example, my local Nissan dealership’s service department:

I brought my Nissan Altima into them in late August, just before the service warranty was going to expire.  After repairing a broken tail light, they did a complete inspection and found nothing wrong.  Six weeks later I brought the car back in for an advertised $19.95 oil change, and this time they suddenly found that the front brake pads had dropped from 7mm to 0mm – when the car was barely driven in that time.  Also, as you can see below, the 5mm rear brakes that were graded as “green” while I had warranty coverage on service, suddenly were rated as “yellow” with the same 5mm pads.

Finding a rotten car mechanic and a dishonest dealership was never that difficult to do.  But finding one that lies on paper – and again in this case doesn’t care about the public perception – is as galling as it ever was. (Note:  after reading this blog the Nissan dealership called and said they’d “make it right” at no cost if I brought the car back in.)

Poor customer service is spreading – especially in industries where there is little to no competition or where the product or service is exclusive.  We consumers will have to find a way to make these large organizations care at some point, if necessary by just boycotting their products.  For now however, we certainly should publicize every circumstance, demand refunds and burn miles – making sure we don’t let the uncaring firms profit from their actions.