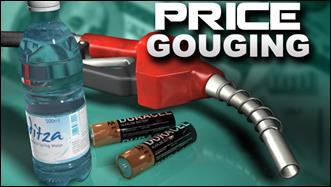 In 2012 my family, along with much of the US northeast lived through Hurricane Sandy.  We were personally very lucky, with only slight damage to our roof.  Many others are still proverbially underwater, still trying to rebuild their homes and their lives.   During that natural disaster it was somewhat difficult to buy gas for our car, as well as buy the groceries and supplies we needed.   This was due to many factors, such as the high demand for those products, the difficulty getting them delivered to the stores, and the many needy people desperate for supplies.  Still, during the most difficult times – when supply was low and demand was high – the stores didn’t dare change their prices.  It would clearly have been unconscionable for merchants to raise their prices just because of high demand.  The price of a product and/or service was set by general market forces and didn’t vary simply because of how much was left.

I and many others have lamented the legacy pricing structure for many years.  “If Airlines Sold Paint” is one of the most famous stories to lampoon this practice, followed-up by my recent “If Airlines Were Restaurants” which delved into the lack of viable competition and borderline antitrust airline practices we live with in the current environment.  Today’s reality however is that the gouging we’d find unconscionable in just about every other industry is totally out of control in the travel industry.

This week I was presented with a stark reminder of just how bad the situation is when I went to purchase airfare for a conference.   CES (formerly known as the Consumer Electronics Show) is the largest industry conference in the US.  (For the last couple of years they’ve capped attendees at 150,000 – and that number doesn’t include exhibitors and associated personnel.)  Once a year, right after the New Year holiday, technologists, specialists and buyers head to Las Vegas to attend this glimpse into the future of technology.  I’ve been honored to have been named as a CES Innovations Judge a few times, including last year.

Roundtrip, nonstop airfares from Newark to Las Vegas – which usually start around $300 and peak around $600 are coming in between $900 - $1,200 for a coach ticket to attend this conference (arriving before the first press conference and leaving on the last Sunday.)  That’s about a grand for a coach seat on a flight that is currently less than 50% booked today.  This isn’t even a situation where there is limited supply.  It’s a case where the airlines know that people have to go on those days so they’ll charge whatever they feel like.  If that isn’t the very definition of price gouging then I don’t know what is.

The hotels aren’t really any better in this case.  Take a look at the rate calendar for Caesars properties below:

The Thursday and Friday of CES is actually priced more expensively than New Year’s Eve – the busiest holiday of the year in Las Vegas.  (I’m only showing Caesars properties because their rate calendar was easy to copy from here – the MGM Resorts and other hotels are priced just as obscenely on those days.)  Just contemplate that level of gouging for a moment.  Caesars Palace is charging $779 on a Thursday for a room they feel is only worth $139 on the following Thursday – that’s a 560% increase.  A month of Thursday prices for Paris Las Vegas run $75, $135, $559, and $139.  While I could understand some premium for the last few rooms in a nearly sold-out property, how can anyone justify these spreads – especially if “because they can get it” is the only justification.  Why is that any different than charging $10 for a quart of milk or $12 for a gallon of gas?

Clearly more regulation needs to return to these industries – especially the airline industry, where the service providers are operating in airspace and at airports that the public owns.  Just as regulatory officials looked for and shut-down gas stations that overcharged during periods of high demand, our government watchdogs should be identifying and putting a stop to gouging in these industries as well.