NOT Traveling Blog, 2nd Week Of May

·      I’ve often blogged about how insanely greedy and out-of-touch the people running the US airlines are.  Whether it was collecting “fuel surcharges” long after the price of oil returned to normal, or supporting airport rent-a-cops pummeling a passenger by falsely claiming he was “disruptive,” they frequently show you who they are.  This week we’ve seen two more examples.  Firstly, Frontier airlines recently announced a “more room” policy, where passengers could pay a fee starting at forty bucks to ensure the middle seat next to them was empty.  When they say (in their best Vito Corelone voice)  ‘…if you want safe travel then we’ll make you an offer you can’t refuse….’ it makes them sound just like the petty thugs they actually are.  After the outcry (that any human being with a heart and a soul should have expected), their President and CEO Barry Biffle said: “We recognize the concerns raised that we are profiting from safety and this was never our intent.”  If they didn’t want to profit from a move that charges people for safety then why did they do it?  I wish these CEOs would just admit when they get caught with their hands in the cookie jar and resign.

·      The second incident is one of the rare instances where airline CEOs are arguing with each other.  American Airlines CEO Doug Parker called out his competitor United Airlines for accepting funding under the $5 billion CARES act (loans/grants from the government that were written requiring the airlines not to cut employee pay or enforce involuntary furloughs until at least the end of September) but then announced that it would be now be cutting employee hours from full-time to part-time – equaling a 25% pay cut.  He’s probably upset that one of his competitors is being a bigger pig than him.  I’ve repeatedly said that we should let the airlines and their current management fail, make their stocks worthless (punishing the investors and the executives that have been deferred to over passengers / customers for far too long) and then just rebuild a more fair and customer centric system for air travel.  That would be capitalism working as it was designed.

·      If you’re a knowledge worker like me – working from home and on so many video calls that you feel physically ill sometimes – then you’re not alone.  Stories have begun popping up in the news about “video fatigue” (or the more colloquial “Zoom fatigue” that acknowledges the tremendous growth of Zoom into the conversational lexicon.)  Users unfamiliar with days full of videoconferences and remote collaboration are experiencing real symptoms of eye-strain, neck fatigue and general stress that can all be associated with long stretches of collaboration technology use without appropriate guidance.  I recently hosted a webcast that explored this phenomenon and offered some concrete tips on how to avoid it.  If you’re experiencing any of these issues please take the time to watch it and make some of the needed changes in your own environment.  I’ve been working remotely for nearly two decades now and I can promise that when it’s done correctly it is a far better model then unnecessarily commuting to and from and office every day. 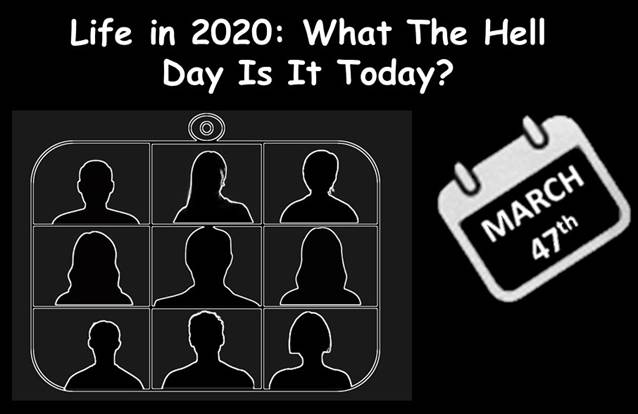 You can order one here.  It was a daunting process to find a custom T-shirt firm that was open and quickly shipping, and would just accept the design.  Again, I don’t make any money with this, it all goes to the company making them.