You Don’t Get An Award For This 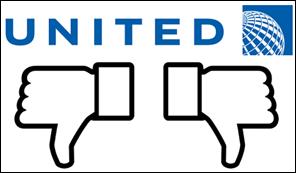 I’ve been reading a number of articles lately about how United Airlines has been doing better.  As a Newark Airport “hub captive” and long-suffering Continental destroyed United flyer, I was happy to see the hopefulness.  We United frequent travelers know how Jeff Smisek took the worst of both airlines, combined it with unabashed greed, pitted employees against passengers and made the airline a total nightmare across the board – lousy service, lousy attitudes, lousy revenue – just lousy.  We’ve been waiting for improvements for a long time.

When obvious corruption forced the pitiful United board to replace Smisek with a new CEO, Oscar Munoz, in September 2015, everyone was hopeful that things might get better.  Munoz at least acknowledged his employees were people and began to treat them with respect – before he was sidelined with a serious health issue.  Now that he’s back in the office everybody was hoping that he’d really begin the turn-around.

I hate to throw a bucket of reality on the spin, but from my perspective, we’re still waiting.

Yes, some articles and trip reports have begun to document how employees – no longer being treated poorly by management – now exhibit better attitudes.  As a business traveler I don’t think we should give praise for seeing the reduction of an attitude and posture that never should have been there in the first place.  That’s not really deserving of praise in my book.  What we need to ask is “are the planes now being better maintained?” and “are the flights now on-time more often” and “are the very frequent customers now being treated better” and “are passengers receiving better benefits and better value than before?” and “is the flying experience improved?” From my perspective, the answer to all those questions is still a resounding NO.

My recent trip to LAS highlighted every single one of the issues above.  As a million miler I used to have the second highest status on United as a reward for my lifetime of flying.  That – along with its confirmed upgrade certificates – was removed by Smisek, and has not been returned by Munoz.  So million milers now have only the same benefits as any poor schlep that opens a United/Chase credit card.  What an honor.  As it happens I did fly enough last year to get that tier anyway, so I did have two regional upgrades in my account – which are supposed to allow a confirmed upgrade to first class when used.  Yeah, good luck using them on any transcon flight.  United is still holding the first class seats open to sell them at steep discounted prices before they’ll reward their best customers.  My “confirmable” request was waitlisted for three months, and never cleared.  Just yesterday I again tried to use it on another transcon trip I have planned for January and – guess what – despite there being plenty of seats available, the request is again “waitlisted.”  Keep in mind that United claims to offer free upgrades to their best customers, but when you can’t even get one with a confirmable certificate you can imagine how infrequently upgrades actually happen on flights where they are worth having.

My flight west boarded on-time but was delayed due to a maintenance issue.  More than half the flights I’ve taken this year had some sort of delay that was entirely preventable if maintenance or processes had been better.  There is still no noticeable improvement there.  My flight back east was nothing short of a nightmare.  Firstly, as I mentioned, my confirmable upgrade never cleared.  The thinking at the highest levels of United management is still why give passengers a promised benefit when United can sell it to someone else and make a few extra bucks.  Then, as I board the flight, I notice we have the United Slimline Seats Of Death.  If you’re not familiar with United, even if you book the same model aircraft you may get two or more completely different experiences.  The 737-900 I took west had slimline seats that were relatively comfortable and useable (despite the DirecTV headset jack being intermittent at my seat.)  The 737-900 flight I took home had the plastic slimline seats that sport a totally useless mesh seatback pocket. 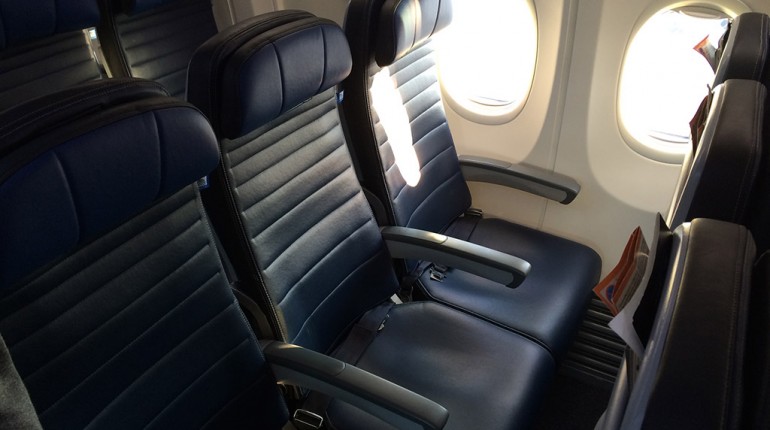 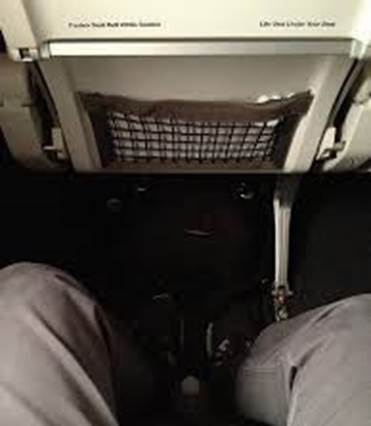 With three normal sized people sitting in this row and each putting a carry-on bag under the seat, no one has any room to breathe much less move.  In the other slim seats United uses one can at least put a water bottle, tablet and a few personal items in the seatback pocket.  With this seat you might be able to partially jam a bottle into the mesh, but then that’s it.  No personal convenience space at all.  United should have these seats removed – at least in their claimed “economy plus” additional comfort sections.  That would be a real, tangible sign that the new CEO cared about improving passengers’ experiences.  The fact that the FA didn’t growl at me when she spilled water on me is frankly not enough of a sign for me that things are getting better.

So while other analysts and reporters may be fawning over United’s improvements simply because they’ve stopped being nasty to passengers, I believe you shouldn’t heap praise on them just for removing an attitude that should never have been there in the first place.  I’ll hold any praise until we see actual turn-arounds - like reversal of customer unfriendly changes in fees and benefits, and improvements in service and comfort.  Until then, in my book, Munoz still represents only an improvement in the rhetoric.