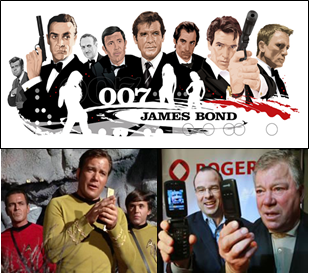 The e.164 alias (the internal company numeric assigned address) for my videoconferencing system is 780077.  When I received that number a couple of years ago my colleagues teased me about it a little bit.  “You’re a 007” they quipped, “licensed to kill collaboration meetings” and variations of that.  After watching an outstanding documentary on the history of James Bond the other day, I realized that 007 had as much to do with predicting and steering the technology we use today as anyone else in the fictional world.

Of course there are myriad examples (and a great documentary too) about how Captain Kirk and Star Trek influenced today’s technology.   Just look at the early cellular phones with a flip-open style to mimic the Star Trek communicator.  One of the coolest and funniest scenes illustrating this was when William Shatner playing Denny Crane on Boston Legal received a flip-open cell phone from his girlfriend (played by ex-Trek actress Joanna Cassidy) which made the Star Trek communicator chirping sound when he opened it.  The viewer’s mind didn’t know what to do with the juxtaposition, other than grin and enjoy it.  The documentary I reference above traces ideas imagined on the Star Trek TV show that went on to influence real life technology.  Another great example of this influence, and an appropriate homage to all of them, took place when Steve Jobs decided to call his new tablet the iPad.  In the Star Trek universe, the personal, transportable computer interface had always been called a P.A.D.D. (Personal Access Display Device.)

However, in James Bond’s case, this wasn’t science fiction set in the far off past.  It reflected the life of today (with that “today” maturing from the 1960s to the current day.)  It showed technology that may have been advanced ahead of the current norms of the times, but not so far off as to break the plausibility of it all.  Sure, we’d accept that a super-secret agent might have a super-secret gizmo that could do what ours couldn’t.  Techies (not Trekkies) like me immediately thought “how can I get one.”   Techies way better than me immediately set off on building some of those gadgets into reality. 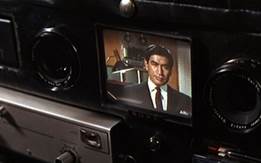 that comes to mind is from 1967’s You Only Live Twice.  Right there in James Bond’s car was the first mobile videoconference system.  Our hero’s version of busy may have been different than that of a business executive, but as he was darting about - chasing and killing the bad guys and bedding all the pretty women - he could still stay in touch with his peers and subordinates getting research updates and coordinating activities. (Actually, come to think of it, that’s not really all that different from some of the business executives we’ve all heard about.)

These high-tech inspirations continued throughout the many years of Bond movies, usually maintaining that level of plausibility.  Whether it was Pierce Brosnan’s mobile phone controlled BMW in 1997’s Tomorrow Never Dies or Daniel Craig using his mobile phone and conveniently stored medical accessories to cure Digitalis poisoning and save his life in 2006’s Casino Royale– we can clearly see these things influencing their real-life counterparts like self-driving cars and smartphone health accessories.  Unfortunately we have still not seen the emergence of the Car/Jet Plane we saw in 1974’s Man With The Golden Gun.  Unlike technology, the greedy airline executive is a model that has not matured very much since the 1960s.  We frequent travelers still have to live with all (if not more) of the challenges and indignities commercial aviation had back then.  It is in fact those challenges and indignities that facilitated the huge growth in videoconferencing, telepresence and related collaboration technologies in the last few years.  Even though I and others have debunked the idea that videoconferencing saves on airplane travel costs, it is still a comfortable illusion that some use to justify collaboration technology purchases (which do provide an excellent ROI in other less obvious ways.)

So if I stop to think about it I guess I am really 780077 in a way – just as I’m Captain Kirk too.  I dart all around the world, meet new people, provide expert advice, excel (with confidence) at the things I do and keep an edge over competitors by using the latest in technology – things that other people may believe only exist in fiction.  Want a real-world example?  I know how to architect a collaboration system that will connect Microsoft Lync (2010 and 2013) with Cisco (and other brand) videoconferencing, allowing point to point and multipoint calls with full, bi-directional content sharing.  Want to find out how?  Call me.  Danto…David Danto.  Make sure you have plenty of diet Iced Tea on hand, shaken and not stirred.