Giving Thanks To Turkeys 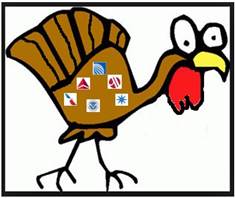 As we approach another Thanksgiving week here in the US - and prepare to feast on the traditional Turkey dinner - many people take time to look back at their year and feel thankful for the many blessings and joys they’ve experienced.  It’s also a good time for us road warriors to look back at the pain and inconvenience we’ve experienced and be thankful for getting through it for another year – living through the turkeys we had to deal with every other day.  Rather than just heave a silent sigh of relief, here’re a list of everyone we have to thank for all that misery we had to trudge through.

·       Thank you to the current US airline management for teaching us that loyalty is a one-way street when greed is a factor.   Whether it’s my MillionMiler status on United that only gets me the perks of any branded credit card holder, or Will Allen’s five million miles on Delta that only gets him a luggage tag, the US airlines have certainly told us that we mean nothing more than cargo to them.  That kind of bad-faith will most assuredly come around to bite these firms at some point, but regrettably the management teams that caused it will have already retired with their golden parachutes.

·       Thank you to the firms that invented and manufactured smaller, thinner seats to fit on the airlines we fly – so more passengers could be squeezed into the same space.  May their CEOs wind up in a special section of hell where their eternal task is trying to fit a standard water bottle into a mesh seatback pocket.

·       Thank you to the many surly gate agents that asked me to test my carry-on bag in the airline’s tiny sizer.  I had to throw out a perfectly good carry-on bag that has fit on planes with me for years to get a smaller one that fits the sizer.  Special thanks to the guy in front of me on my flight last week who’s bag didn’t fit the sizer, was given a tag and asked to bring his bag to the end of the jetway, and who ripped the tag off the second he passed the gate.  Yup, his bag fit just fine lengthwise on the plane.  He’s my new hero.

·       Thank you to the TSA and their completely broken Pre-Check program.  I am a cleared, vetted, approved trusted traveler according to the US Customs and Border people, but I still have to take my shoes off and remove my liquids if they haven’t staffed their security lanes adequately.  They miss over 90% of mock threats but they make sure they hassle people that pre-agreed to be vetted and inspected.  Well done.

·       Thank you to Uber for reducing the required qualifications for driving my loved ones around to only ‘someone that has a car.’  Just like Russian roulette you don’t get your head blown-off most of the time – but smart people still don’t think it’s worth the risk to play.

·       Thank you to Marriot for agreeing to buy Starwood.  You’ve provided yet another chance for the US DoJ to look at all the past ‘mega-mergers’ in the travel industry to try and find even one that turned out to be better for anyone other than the management team.  The important equations are 1) Consolidation = consumer/employee loss and 2) Management teams’ testimony = lies to gain approval – it’s not even that hard for the math challenged amongst us to understand.

·       Thank you to the hospitality industry in general for hiding increased costs in the boondoggle called ‘Resort Fees.’  Even the airlines were forced to show their total costs (with ridiculous fees and surcharges included) in a single quote.  How the hospitality industry can get away with quoting a room for $70 a night but then adding a fee listed elsewhere on the page that brings the cost to over $100 is beyond me – that’s just intentionally being deceptive.

I’m sure there are more people and firms I could include, but as we approach the end of the year and the start of a new one what’s clear is that the experience of being a frequent traveler is a lot worse than it used to be.  Anyone who thinks it’s the glamorous life of George Clooney’s character in Up in the Air isn’t really in-touch with today’s realities.  That’s why the videoconferencing and collaboration solutions I design are more popular than ever – people are just tired of the continuous hassle.  I and many others wish these were the turkeys we could be carving up.