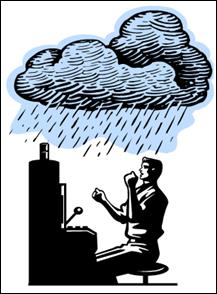 It was a dark and stormy night…no, really - it was.  A huge storm was coming up the east coast of the US.  It had already wreaked havoc on homes and businesses in the southeast and was due to pass through the New York area the next morning.  I of course was scheduled to fly from Newark to Washington at 6am to be at an all-day meeting with a client (and was scheduled to fly back that evening.)  The one-day fare to DCA is remarkably only about $230 US nowadays.  Of course - considering I would be stuck on a teeny regional jet I was overpaying for the value of the experience - but that sarcastic reality aside even I knew it that is a good price for a one day business trip.

However, bargain fare aside, it was a dark and stormy night.  I had to be at that meeting.  I knew I had no choice but to book myself on Amtrak’s Acela as the train would probably run through the storm when the RJ probably wouldn’t.  It was the responsible thing to do for my client – and a bit over four hundred bucks later it was done.  So the question was what to do about the $230 I already gave United for the flight that wouldn’t fly.

I of course checked their website and called to see if there was a flight waiver – no dice.  For a fleeting moment I thought about making-up a dishonest excuse and seeing if United would give me a refund – but I wasn’t going to lie, and for the most part the airlines now don’t give refunds even if you have a legitimate medical or bereavement excuse.  (They say that is what one should have bought insurance or a less-restrictive, higher priced ticket for.)  So with all the power in the hands of the airline (the house) I had no choice but to wait and hope they cancelled the flight.  They didn’t.

As I was driving to the train station – and with 30 minutes before boarding – I called United and told them I couldn’t make the flight due to the storm.  (I didn’t want to be recorded as a no-show.)  They cancelled the ticket.  I took the train (and as you’ve probably guessed the gods of irony opened-up a 30 minute clearing in the poor weather and the RJ took-off.)  So the bottom line of this episode is that I have banked a one year, $30 credit with the airline - $230 minus the $200 change fee.  Whoopee.

As a business traveler I wish I could say this was a rare problem – but it’s not.  My roundtrip to Miami in a few weeks needed to change to a return from Orlando after I drive to meet with a client there.  Changing my ticketed return was over $100 more than just buying a new, one way ticket back.  Will I get credit for the value of not flying that jet the thousand miles home?  Sure – but the credit will be less than the $200 change fee I’d be charged to use it.

In the world of airline travel, the domestic business traveler is like grandma playing the slots on her once-a-year trip to Vegas – a very low roller.  Maybe she’s on the mailing list, maybe she gets some offers or a loyalty/players card that say how important she is, but any illusion that she is a high-roller or VIP is just a lie intended to make her spend more.  The real VIPs – the whales that the airlines will do nice things for – are the ones spending thousands and thousands of dollars of their firm’s money on first and business class international tickets.  For the rest of us, the house always wins and we don’t stand a chance.  The spend-conscious, domestic business travelers are just “over-entitled.”

The upshot of all of this (as many have said) is that airline loyalty is a one-way myth.  Thankfully though, many more frequent travelers are beginning to see through the lies.  In today’s environment, domestic business travelers are much more open to jumping ship on any given trip.  For example, my January business itinerary going Newark – Vegas – San Fran – Newark isn’t entirely with the airline I have million-miler status on.  Flying that Vegas-San Fran leg as a one-way fare on JetBlue saved my firm a few hundred bucks – a third of the itinerary price.  However - more than that - it felt good not giving the money to an airline that isn’t treating me with enough respect to warrant my loyalty.

Believe me, if business travelers feel better not giving their business to the airline they have loyalty / status with then it is truly a dark and stormy night for the airline industry.  Who knows what new business model the morning will eventually bring.