My wife and I Just returned from our first ever cruise.  We had a wonderful and terrible time, and learned quite a bit.

As I mentioned in my past blog, the opportunity to take the cruise – essentially the first for us – came from a loyalty offer that was too good to refuse.  We were offered a “free” four day cruise anywhere in the Caribbean.  As pure novices (and for the most part, non-drinkers) we figured that even with the expense of all the add-ons (beverages, excursions, taxes, tips, etc.) it was a good chance to have our first cruising experience without too much pain.  We looked for a modern, comfortable ship, and were about to make the reservation, when my wife noticed that they also offered a four day cruise that stopped in Havana, Cuba for a day, stopped in Nassau for a day, then went back to Ft Lauderdale.  We felt the opportunity to experience that culture was too good to pass-up.

Havana is fascinating.  A 1950s architecture and infrastructure frozen in time.

We took a comprehensive tour, with our guide Milton providing many local details along with what we assume is the typical Cuban view of history and politics.  It is clear that the Cuban people are very happy to have a thaw in relations with the US, and they enjoy the opportunity to add tourism to their struggling economy.  We were on a fully sanctioned “official cultural exchange” excursion, as that is now the only legal way to see the country.  The time was precious and worth every minute.  It was fascinating to see the ornate architecture – mostly left to crumble and decay – with tenant’s drying clothes and bedsheets draped over the balconies.  It was a real anachronism.

Then, a day later, when we were in Nassau – where we’ve been before – we decided to take a “Seaworld Explorer” excursion, which takes place in a half ship, half submarine – a vessel with many windows below the water level. 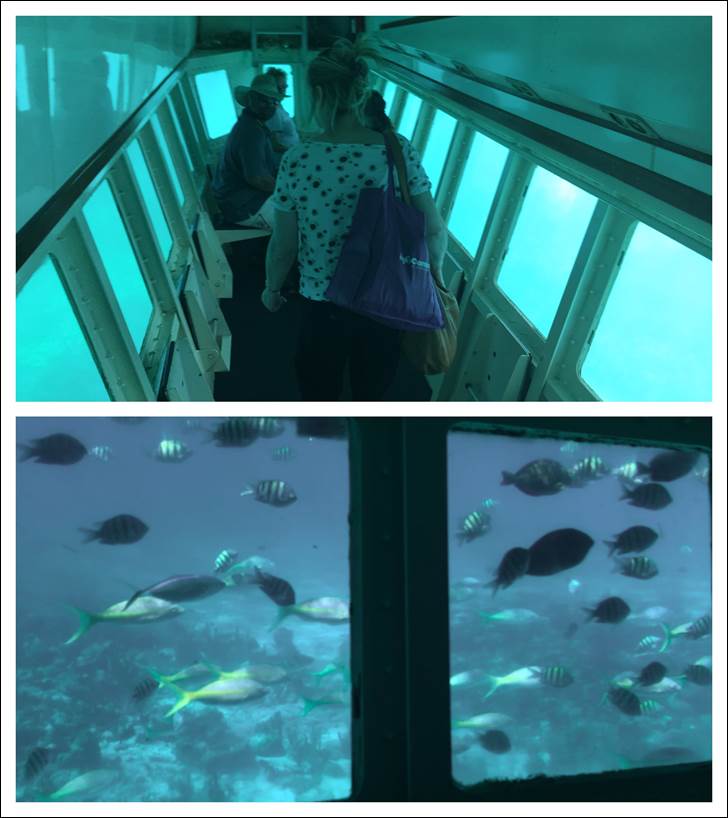 It was amazing to watch the sea life in their natural habitat without the fuss of snorkeling or SCUBA.  It is an experience we highly recommend.

Now, the not so good stuff.

Because of the small nature of Havana’s port facilities, apparently only smaller, older cruise ships can go there.  The ship that travels this route for Royal Caribbean is – well – honestly – a toilet.  I use that term not only because of how bad the ship’s condition was, but because of the constant smell everywhere.  Our teeny, tiny cabin was so small that you could only get out of the bed on one side.  It had worn and water-damaged walls, inoperable lights, and its one electrical outlet was as far away from the bed as you could get. 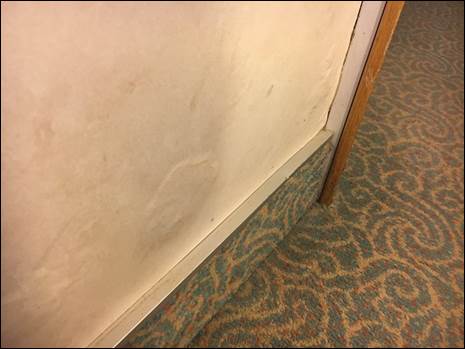 The water damaged walls in our cabin

It also had a bathroom that continually smelled like a subway station public toilet.  We used deodorizing spray every day to try to mask it, but it was pervasive.  That wasn’t the only place on the ship that smelled like a toilet.  The public corridors had a strong bathroom stench, ship’s exterior decks had the stench, in fact - at least half of the ship smelled like a toilet off and on.  To say the ship we took stinks is an understatement.

As a first time cruiser, we actually believed it when friends told us ‘don’t worry about seasickness - the modern ships are so stable you’ll never feel the waves.’  Well, we learned that was bunk.  The morning we were approaching Havana we experienced some of the choppiest seas I’ve ever seen.  It was as bad as any flight or boat that I’d ever experienced – and that includes a People’s Express flight many years ago that had a broken autopilot which pitched uuuuuppp then doooooown over and over like a demented roller-coaster for two hours.  I handled it for as long as I could, but even with all the Bonine in me I was tossing my cookies after about a half hour.  Later that morning the captain apologized for “all the potholes” on a ship-wide announcement, but nonetheless, the unease had a significant impact on our short time in Havana.  We pulled ourselves together enough to experience our Cuba tour, but we were in no shape to go back out at the end of the day (as we had planned) to experience the nightlife we wanted to see.

As any reader of my blog knows, I’m not shy to compliment when something is great or complain when it isn’t.  What we found aboard this ship was a young staff that gave off the vibe that they were about as invested in the company as “summer camp counselors” would be – there to do their jobs for the time they have to put in, but not representing the cruise line in any way.  There was literally no one on board the ship that we could speak to that would even care about how much was going wrong.  We had continuous problems and no one took responsibility for what turned out be a four-day-long disaster.

My wife and I had hoped for a diamond / platinum level experience in a floating five star hotel.  We would have settled for an average experience in a floating three star hotel.  What we got was a comedy of errors in a facility that makes a Motel Six look like it hosts ‘royalty’ more than this ship does.  Benefits not honored, excursion times messed-up, all the aft public toilets broken, on-board internet so bad that it makes airline WiFi look good, ship-wide announcements from the captain so unintelligible that even the ships own performer / comedian made fun of it on the last day of the cruise in his act.  I could honestly go on and on.

We reached out to the executives of Royal Caribbean when we returned, and after receiving a gracious emailed apology, their representative eventually called us explaining our experiences were mostly due to “miscommunications.”  They didn’t promise to address any of the issues, but they offered us each a $100 onboard credit for a future cruise.  That’s like telling a restaurant patron who finds a mouse in their food that they can have a 20% discount on their next meal there.  It’s hard to believe that a reputable firm like this could be so blind to that warped message.  I’d honestly rather have my four days back, but even if I can’t, offering me a tiny discount on a mouseburger just isn’t the way to stay in business.  If someone questions my professional integrity I go out of my way to prove them wrong, not tell them they can have a discount on future business they may no longer trust or respect.

So, as much as I’d highly recommend experiencing the rich culture of Havana first hand, if our ship is any example of the experience that one has to put up with to get there I’d strongly recommend visiting a Cuban restaurant in Miami instead.