Sometimes I just don’t understand what’s going on at the airlines.  I mean, I do believe that the US airline industry is rife with greed and incompetence at the management level for all the reasons I’ve mentioned in all my past blogs, but even with that, my day to day travel experiences still manage to constantly surprise me.  It seems that no matter how cynical I become – no matter how much I’ve steeled myself against the inevitable disaster my next flight experience will bring – the airlines still manage to amaze me with a new poor experience at every opportunity.   Interestingly however, I think I’ve finally found a pattern in most of the poor experiences – a simple explanation that just might account for all of it.  Airline management and employees must just be bad at math.  A number of recent experiences have brought me to this conclusion.  Firstly, with hundreds of planes permanently parked in the desert and the airlines flying less planes and less flights than ever before (just to artificially make sure that the demand for seats always exceeds the supply) one would think that the job of getting them ready to fly would be easier (less flights = less planes to take care of = easier workload.)   Here’s our first clue suggesting a math problem - this logical math doesn’t add-up.  But then the plot thickens further…

There is a vocabulary word that seems to be popping up very often over the PA systems at airports recently – one that I haven’t heard with this frequency in my three plus decades of flying.  The word is reboard – as in ‘passengers on flight xxx should make their way back to gate xxx to reboard the aircraft.’  Why reboard you ask?  Clue number two - because the passengers were let on the flight before the math was done.  In one case two weeks ago I and my fellow passengers completely and fully boarded United 1217 in Las Vegas before anyone on the ground or in United’s flight operations realized the crew was not at the airport, and in fact had not even taken-off on their flight from LAX to LAS.   Simple math would have shown how the pilots couldn’t possibly make it.  But before I get into time calculations (and believe me, I will) an even more simple question comes-up.  What ever happened to the math involved in a checklist – just simple counting?  In all my many years of flying, step 1 has always been for the crew to board the plane to test it.  I mean, I may not be an expert in aviation engineering here, but it’s probably a good idea to ensure that there aren’t any Pythonesque “great big holes in the roof” and that the wings and engines are still attached.  In my past three decades of flying, passengers were let on a plane only after that check was accomplished.  Well, apparently not anymore.  This ‘get-on – oops-get-off – now reboard’ has been happening a heck of a lot more lately.  For another example of it, just last week I and my fellow passengers began boarding and getting settled onto United 233 in San Francisco when we were told there was “a maintenance issue” on the aircraft and that we’d have to leave.  That flight just happened to be the only 777 making that route that day.  Had it been cancelled there was no way the remaining flights could have absorbed the overflow.  As I was getting off the plane I asked the captain and maintenance crew what the issue was (and if I should scramble to get onto another flight.)  They explained that the captain’s chair was broken and a new one would have to be installed.  This was an aircraft that flew into SFO the night before, and one that in fact taxied across the tarmac that morning from an international gate to the domestic gate it was departing from.  I found it very unlikely that the captain’s chair would work perfectly upon arrival the night before, again perfectly when it was powering-across the taxi-way, and then again perfectly when the crew boarded and OK’d the loading of passengers, but then spontaneously disintegrate as the passengers were stowing their carry-ons.  It’s more likely that no one felt like doing their job and reporting it at the end of the prior day or fixing it overnight.  But whatever the timing of the issue, checking if the pilot could even sit on the plane was apparently not a step with a lower number than boarding the aircraft.

Keep in mind those two incidents from just this month were only from flights that I personally flew on.  As I sat at a gate in Newark last week waiting for a late arriving aircraft I must have heard that word reboard over the PA system at least a dozen times in a two hour window. My only conclusion is that no one is running pre-flight checklists before boarding anymore.  Bad at math…

The cincher to my hypothesis comes (as promised) in the form of time calculations.  Remember the UA 1217 flight I mentioned above – fully boarded with the pilots still stuck in LA?  Once somebody actually discovered the problem and posted the new timings, the bad math skills became obvious.  First we were told that the flight with our crew had finally taken off and that our delayed, new time of departure was 6pm.  However, the airline personnel must have forgotten that we all carry smart devices and can figure out which flight the actual inbound aircraft is.  Here is a side-by-side comparison of the new flights - screen captured within seconds of each other: 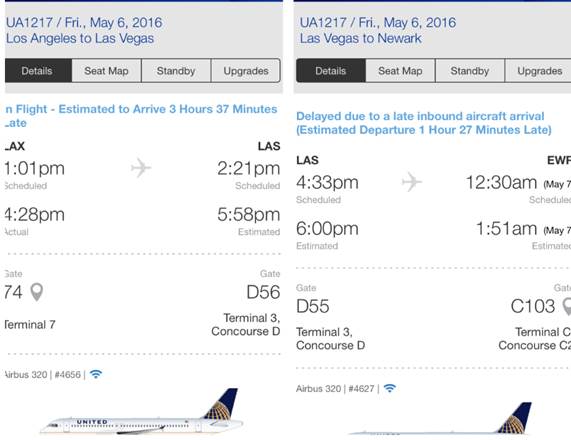 Apparently the pilot and co-pilot were going to blow the emergency exit doors and then leap from their aircraft to the one they would then be piloting at the next gate, and would then magically complete pre-flights checks, board (excuse me, reboard) and depart all in two minutes.   I was clearly concluding bad math at this point – that is ‘till the next update came. 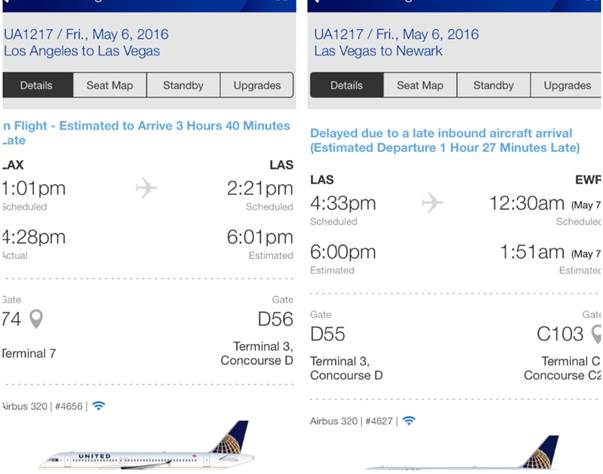 Ah…now the pilots were going to land at 6:01 and depart at 6pm (another Pythonesque reference – like waking up half an hour before they went to bed.)  I was beginning to think that maybe it was all of the STEM skills that may be lacking – including the lack of a fundamental understanding of the space-time continuum.   But then they corrected the departure time to more plausible (yet still impossible) 6:20pm.  (Also, take particular notice of the reason given for the delay - “air traffic control conditions” instead of an inability to manage crew logistics to a professional standard.)

The most amazing thing was, at 5:40 pm that evening, with the pilots still at least 20 minutes outside of LAS, they boarded the flight again anyway!  No pre-flight checklist before boarding at all.  If something was found to be wrong they’d just have shoved us poor schleps off the plane a second time and made us reboard again.  No wonder there are so many announcements about reboarding nowadays.  This wasn’t a one-off stupid move, it’s now apparently policy to be bad at math.

I can only hope that clearer heads prevail someday and we start running airlines by the numbers that count again, instead of the numbers on share valuations and golden parachutes.  If not, us passengers will all be needing parachutes.