What Really Would Be Awesome 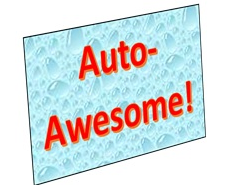 Google I/O  is the developer / technical conference that the web behemoth holds every year.  At this year’s recently concluded conference Google announced a number of changes to their services.   Some were improvements to what that had before (which not everybody agrees are better - like this opinion that they broke their useful “chats” feature,) but what immediately caught my attention was a new feature they called “Auto-Awesome.”

As described in the New York Times, Auto-Awesome can “stitch together a series of snapshots — a child blowing out birthday candles and cutting a cake, for example — into a short animation, or merge multiple photos shot at different exposures into a single image with high dynamic range.”  Now that does sound like very cool technology, but not what I expected at all.  When an organization of geniuses that’s so well-funded that they could tell China to go to heck releases a feature called Auto-Awesome, I expect more amazing results.

Think about that for a bit.  With an unlimited budget and the smartest geeks in the world, what should something called Auto-Awesome really do?  To make it easier for you (and them) I have compiled a list of suggestions specifically for the business traveler below:

·         The Auto-Awesome feature of a credit card would identify airline executives and automatically charge them an extra $200 every single time they wanted to make a change to anything (You want onion rings instead of fries - $200; You want this in the next size up - $200; You’d like a table near the window - $200; You want to correct the spelling on that document - $200; etc.)

·         And while we’re on that subject, the Auto-Awesome feature of an airline HR department would screen Chairman and CEO candidates and immediately disqualify any lawyers or accountants.

·         The Auto-Awesome feature of an airline reservation system would actually make sure you get the first-class upgrade the airline elite marketing people promised you rather than trying to sell it to everyone beforehand.

·         The Auto-Awesome feature of your noise-cancelling headphones would identify and mask-out all the lies people tell you (“…yes, your flight is still on time…” even though the incoming aircraft has a two hour delay)

Honestly though, this would be too good a thing to just restrict to business travelers:

·         The Auto-Awesome feature on your phone would make the mobile phone of the person you’re calling leap in front of his or her face and scream “Yo idiot, answer your freakin’ phone!  What do you carry it for if you’re not going to answer it?”

·         The Auto-Awesome feature of a payroll system would immediately take all money paid to any executive beyond $1million a year and redirect it into the paying firm to create more jobs and give everyone else cost of living raises.

·         The Auto-Awesome feature over at Paramount Studios would let JJ go off to fulfill his Star Wars dreams and hire someone with directing skills AND who cared about the Star Trek cannon to manage that franchise going forward (@jonathansfrakes are you listening?)

·         The Auto-Awesome feature of your email client would prevent and block anyone from sending you email if that person or organization refused to accept replies by email.

·         The Auto-Awesome feature of your organization’s conference room would instantly connect all the people expected on your videoconference without hassle or technical glitches, so your meeting could start within a few seconds of the actual start-time.

All of those are just fantasies of course.  They’re what we’d like to see a firm like Google spend it’s time and money working on.  All, that is, but the last one.  That’s reality.  If you don’t have a videoconferencing / Unified Communications ecosystem that just plain works - without technical glitches or time-wasting set-up - you should drop me an email.  I work with organizations to make that their reality every day.