By almost every measure, 2016 was just an awful year.  One only has to think about the people we lost, the unrest in the world, the politics - and then of course, one has to include the business travel experience.  So I suppose it was fitting that on my last business trip of the year this week, I would experience a small taste of everything that’s gone wrong with air travel.

My United outbound flight was taking off from Newark terminal A.  This of course meant that that – despite being in the trusted traveler program and having Pre-Check clearly indicated on my boarding pass - I wasn’t going to get a Pre-Check experience.  One can (amazingly) still get Pre-Check indicated on one’s boarding pass even when it isn’t ever offered at the terminal / gates in question - because there is still no correlation between TSA Pre-Check services promised and delivered.  I knew in advance I would have to be creative if I didn’t want to have to unpack and repack my bag while in the security line.  The solution of course was to go through security in Newark’s Terminal C – where Pre-Check is offered and usually available, and then take the airport transportation over to A.  That’s an inconvenience, but it’s one that shouldn’t be a problem at a modern airport.  Ah-ha, I have you there – as Newark is not a modern airport.  Yes, tons of money has been spent upscaling the waiting areas, creating iPad equipped bars where convenient moving walkways used to be, removing the convenience stores and replacing them with “European Style” “Bistro Stores” (meaning the potato chips are now a brand you don’t recognize and are now quintuple the price.)  However, when it comes to connecting between terminals – for that you still have to walk down some outdoor metal stairs and ride a bus on the tarmac.  I decided that that particular schlep would still easier than TSA required disrobing and unpacking my shampoo and computer, so it’s what I did.  I knew I’d still get to terminal A in time to jump on my scheduled conference call from the United Club there. 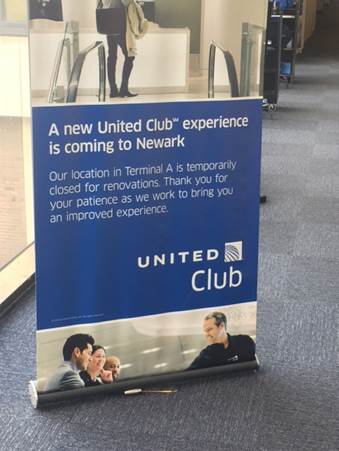 But of course, instead of finding the club I found the above sign.  You’d have thought that with United charging hundreds of bucks every year for membership they’d have sent a note to the locals in the New Jersey / New York area that the club was closing.  Of course not.  Despite getting at least three spammy emails from United a day, that little gem was left out (probably out of fear that too many people would be angry about it.)  United has been playing bait and switch with their clubs all year – open / closed; take passes / no passes allowed / passes allowed unless they feel it’s too crowded; etc.  This one really hurt though.  I counted on being able to join colleagues and get work done from my PC.  When I reached out to United about this, their response was:

Amongst the many challenges facing United, it’s going to have to decide if it wants to operate out of terminal A or not.  This “we will - but with only part of the services we offer at C” is getting very, very tired.  It’s not my fault that their leasing deal in A is different than the one in C – they are either offering the needed services and amenities there or not.  Maybe one less overpriced bistro will pay for a better security queue area and one less “pay with your miles on an iPad” bar would pay for a more modern people mover between terminals.

So, getting back to my trip, after the conference call (and having to read documents on my iPhone instead of my PC) we boarded the flight.  It was an Embraer ERJ-145 – the aircraft we used to call “Barbie’s Dream Jet” because of the similarity in size and interior room with the actual pink toy.  I was lucky enough to grab seat 18A – the single seat at the exit row.  When you lift the window side half armrest this seat is almost wide enough for a human to fit into, and the exit row forces a decent amount of legroom.  That luck unfortunately comes along with the exit door – which causes the seat to be pretty cold, and in this case had the added inconvenience that the cover of the exit release lever was falling off the door.  One could even see the residue of the tape that someone must have put on to keep it in place at some time in the past.  The fact that the interiors are falling apart is only one reason these RJs need to be retired.  The other reasons (as I soon was reminded) include the rest of these aircrafts are falling apart too.

Shortly after boarding on time, the captain told the passengers that our “air conditioning” had a problem, and the “mechanics were on the way.”  I can’t even remember how many times this year a maintenance problem was discovered on my plane only as boarding had begun or was about to begin.  There is no doubt that United and other airlines have been cutting back on the quality and value of their aircraft maintenance programs – either through outsourcing or postponing routine maintenance, or just devaluing and dis-incenting the contributions of their mechanics.  This flight was just another example of being unnecessarily delayed because an aircraft was not properly maintained – which happened on nearly half of the flights I took this year.  A new air conditioner part needed to be installed.  Once it was done we were on our way.

When we landed, and taxied over to the gate, we learned that the replacement air conditioner part used was not compatible with the standard gate APU at our destination, so they couldn’t turn off the engines and we couldn’t get off the flight.  This was a second delay on the back-end due to the same problem – a double whammy due to incompetent maintenance.

When I was heading back home a couple of days later it looked good for a slightly better experience.  I was scheduled on an ERJ-175 (a bigger regional aircraft that has a first class cabin and overhead bins big enough for rollaboards.)  I had stunningly received an advance upgrade to first when the upgrade window opened days earlier.  This is only the second time all year that that happened - in nearly 100K miles flown and over 50 segments.  The only reason it happened this time was that it was a 6am flight which was half empty – and which will only be in the air for about an hour – so United figured they’d never get anyone to pay for an upgrade.  United usually offers non-elite passengers upgrades for what has been angrily called “tens of dollars” as passengers check in at an airport kiosk or on-line.  United management would rather make ~50 bucks for the upgrade then keep their promises to their most frequent customers.  (Everyone except airline management knows that someday this disloyalty will come back to bite the industry.)  However, for today, I’d get the bigger seat to sleep in for a bit as I head home.  The good feeling passed- right along with the boarding time - while we were all still waiting at the gate area.  None of the four person crew had shown-up on time.  They trickled in within a 10-15 minute window after the boarding time had passed.   We boarded late, left late, but arrived on-time because of the padding rampant in today’s airline schedules.

So my last trip of 2016 experienced the failed promise of TSA Pre-Check; the failure to deliver promised and paid for club benefits; the misguided priorities of investing only in things that can be charged-for at Newark Airport – not the underlying infrastructure; the failure of United to properly maintain their aircraft; a reminder of the usually un-kept promises of loyalty rewards (unless there are not really desirable in a given instance); the inability to manage crew logistics; and the ridiculous nature of airline schedule padding – a pretty decent sample of all of my 2016 experiences.

That trip thankfully wraps-up my travel for 2016.  I get a few weeks at home before I have to hit the road again for CES.  My United “confirmable regional upgrades” for that itinerary have still not cleared in the three months since I applied them to the reservation.  I doubt that they will.  If United can get fifty bucks for an upgrade from some once-a-year traveler why would they let me use a benefit they promise to be “confirmable upon use?”

I hope you and yours have an enjoyable holiday season and New Year celebration, and that your travels (and mine) are markedly better in 2017 – unless you’re part of United’s management.   In that case my wish for you is to continually experience the “friendly” coach travel on your own airline until you actually realize and address the problems.